1. Impossible is just a big word thrown around by small men who find it easier to live in the world they have been given than to explore the power they have to change it.

2. A men who views the world the same at fifty as he did at twenty has wasted thirty years of his life.

3. Don't quit. Suffer now and live the rest of you life as a champion.

4. It's the repetition of affirmations that leads to belief. And once the belief becomes a deef conviction. Things begins to happen.

6. If you even dream of beating me you'd better wake up and apologize.

7. If your dreams don't scare you, they aren't big enough.

8.  I don't count my sit-ups. I Oly star counting when it stats hurting. That is when i start counting, becaouse then it really counts. That's what makes you a CHAMPION.

9. If my mind can conceive it, and my heart can believe it then i can achieve it

10. It isn't the mountains ahead to climb that wear you down. It's the pebble in your shoe

11. Don't wait for the world to recognize your greatness. Live it and let the world catch up to you

12. Champions aren't made in gyms. Champions are made from something they have deep inside then a desire, a dream, a vision. They have to have the skill, and the will. But the will must be stronger than the skill.

13. Imposible is not a fact. It's an opinoin

14. Even the greatest was once a beginner. Don't afraid to take that first step.

15. I do not believed in taking the right decision, i take a decision and make it right

17. I know whare I'm going and i know the truth and i don't have to be what you want me to be i'am free be what i want

18. Only a man who knows what it is like to be defeated can reach down to the bottom of his soul and come up with the extra ounce of power it takes to win when the match is even.

19. I hated every minute of training, but i said, 'don't quit. suffer now and live the rest of your life as a champion.

20. He who is not courageous enough to take risks will accomplish nothing in life

21. We all have the same God, we just serve him differently. Rivers, lakes, ponds,streams, oceans all have different names, but they all contain water. So do religions have different names, and the all contain truth,  expressed in different ways forms and times. It doesn't matter whether you're a Muslim, a Christian, or a Jew. When you believe in God, you should believe that all people are part of one family. If you love God, you can't love only some of his children

22. Inside of a ring or out, ain't nothing wrong wth going down. It's staying down that's wrong.

23. To be a great champion you must believed you are the best. If you're not, pretend you are.

24. Hating people because of their color is wrong. And it doesn't matter which color does the  hating. It's just pain wrong

25. I prayed to Alloh to protect me from enemies. Suddenly, i began loosing friends.

26. My principles are more omportant then the money or my title

27. Tolerance and understanding won't 'trickle-down' in our society anymore than wealth does

28. I don't smoke. But i keep a match box in my pocket. When My heart slips towards a sin. I burn a match stick and heat my palm. Then i say to my self :  Ali, you can't bear even this heat how would you bear.

29. If they can make penicillin out of maldy bread, then they can sure make something out of YOU.

30. What keeps me going is goals 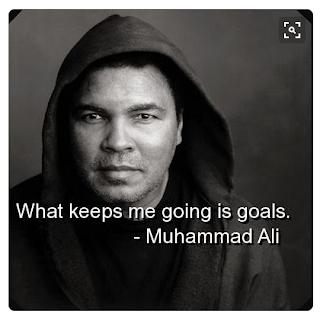